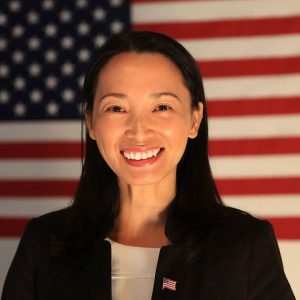 Sue Googe, patriot activist and former candidate for United States Congress from the Fourth District in North Carolina, will address the Haywood Republican Alliance monthly social on Tuesday, January 23 at 6 PM, preceded by a pot luck dinner at 5:30.  All interested persons are invited to attend.

One of the themes on which Sue is expected to speak is “Say No to Political Correctness”.

Born into extreme poverty in communist China, Sue spent her childhood in the remote mountain region of Hainan Island, far from civilization and without running water or electricity.

Sue learned firsthand that allowing a national government to consolidate power over the economy and the lives of the citizens will lead to violence, oppression, and poverty.

Sue’s childhood days were filled with hard labor and daily struggle, but as a young girl Sue began to show a talent for reading and writing poetry. Her parents were illiterate but they held education in high regard. So, with the help of a family friend, Sue was sent to a local boarding school at the age of 11 where she had to learn to manage her life and her finances on her own.

At the age of 20, Sue was given the opportunity to move to the mainland to take her first job in the manufacturing industry as an accountant. In 1998, at the age of 26, Sue moved to the United States on a student visa where she studied Computer Science at Wake Tech Community College from 1998-2000.

In 2000, Sue began working in the information technology industry, as a software engineering contractor, while she continued her education at UNC-Chapel Hill, where she studied Information and Library Science from 2001-2005.

By the Fall of 2005, Sue’s dream of becoming an American citizen became a reality and in 2010, as she continued her work in the IT industry, she founded a real estate investment company in Cary.

Sue and her husband of 16 years have been residents of Wake County for nearly two decades. They both enjoy traveling, boating, and flying airplanes. Sue also loves to ride horses and spending time outdoors.

She feels blessed to have had the opportunity to pursue her dreams and live her American Dream and she is committed to fighting the corruption and cronyism in our political system, which is threatening the very foundation of our nation’s prosperity and opportunity for all.

Sue wants to be a new voice, for a new generation, to ensure that the American Dream is alive and thriving for all Americans.

Haywood Republican Alliance is located in Walnut Plaza at 377 Walnut Street, Waynesville NC 28786, next to All About You Salon and Spa.