It’s wrong for Trump to blame the conservatives.

The demise of the American Health Care Act, House speaker Paul Ryan and the White House’s ill-fated effort to reform Obamacare, has prompted a cascade of finger-pointing as Republicans try to assign blame for their recent embarrassment. 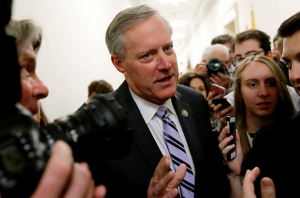 The White House and much of the Republican establishment have settled on a familiar scapegoat: the famously stubborn 30 or so members of the House Freedom Caucus. On Thursday morning, President Trump tweeted: “The Freedom Caucus will hurt the entire Republican agenda if they don’t get on the team, & fast. We must fight them, & Dems, in 2018!”

We have been not infrequent critics of the Freedom Caucus, who often seem oblivious to Ronald Reagan’s observation that “my 80 percent friend is not my 20 percent enemy.” There is no doubt that members of the caucus can be frustrating and prone to an unrealistic tactical maximalism.

Yet in this latest episode, the Freedom Caucus was mostly in the right (and it wasn’t just them — members from all corners of the House GOP found it impossible to back the bill). The American Health Care Act was a kludge of a health-care policy. Described as a way to simultaneously repeal key elements of the Affordable Care Act and replace them with market-oriented reforms, the bill in its final form managed to do little of either.

Freedom Caucus members were particularly concerned about the willingness of House leaders to leave the vast majority of Obamacare’s regulations on the books — after Republicans spent seven years promising that the party would “repeal and replace Obamacare.” Even the rationale that the AHCA would be better than nothing was hard to justify; it probably would have further destabilized the individual market, while millions fewer would have been insured.

No wonder that strong-arming on behalf of the bill didn’t work. According to news reports, in the final hours, the White House sent adviser Steve Bannon to tell obstinate Freedom Caucus members that they “have no choice” but to vote for the bill. It’s hard to imagine a less effective pitch to a group that has long accused Republican leaders of trying to coerce conservatives into falling in line against their principles.

2 Replies to “In Defense of the Freedom Caucus”